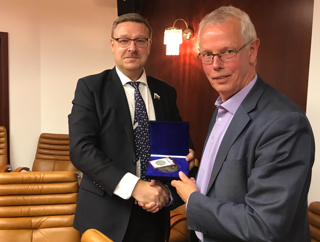 Mr. Kox highlighted that in the meetings with his Russian colleagues, amongst who Mr Kosachev, Mr. Lukin, Mr. Zuganov, Mr. Melnikov and Mr. Mironov, the clear wish, from all sides, was expressed that “we should and could find an acceptable way out of the unproductive stalemate we got ourselves in some years ago.”

He continued that “we all agreed that we should no longer spend much time to what has happened in the past but should focus on our future co-operation in the Council of Europe and PACE.”

The head of the Group of the Unified European Left in PACE will now communicate his findings in Russia with his colleagues of the Presidential Committee and others in Strasbourg and then see which steps could and should be taken, in order to “contribute to an a.s.a.p. return of the Russian delegation to PACE.”

There is a mutual understanding from both sides that “Inter-parliamentary dialogue is in the interest of all Parliaments of all Council of Europe member states, especially in the complex times we are living in”, Mr. Kox concluded.