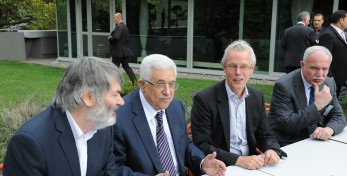 UEL welcomes new attempts of the Palestinian National Authority to become member state of the United Nations. Earlier, in 2011 Palestine already became partner for democracy of the Parliamentary assembly of the Council of Europe, as proposed by Tiny Kox, rapporteur on Palestine (2011 – 2014). President Abbas came to Strasbourg to address the Assembly after the start of the new partnership.