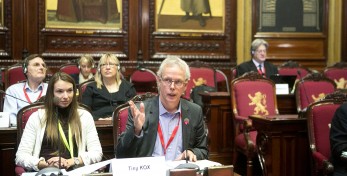 Mr Kox actively participated at the PACE Standing Committee in Brussels on Tuesday 18 November at the Federal Parliament, in the context of the Belgian Chairmanship of the Committee of Ministers (November 2014-May 2015).

After the opening of the meeting by PACE President Anne Brasseur and the speech by the Speaker of the House of Representatives, the members of the Standing Committee held an exchange of views with the Belgian Minister for Foreign Affairs, Didier Reynders. The discussions focused on Belgium’s priorities during its Chairmanship and other issues in the framework of the Assembly’s ongoing political dialogue with the Committee of Ministers.