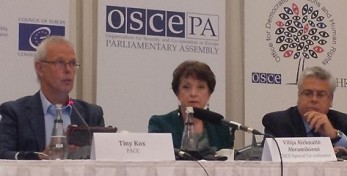 “We praise the active participation of citizens, the high voter turnout and the broad observation activities by political parties, as well as by citizen observer groups, which in the future should be granted official status,” said Tiny Kox, Head of the PACE Delegation.

Mr. Kox praised also the many political parties which gave the citizens a genuine choice in these crucial elections. Nonetheless, the Head of the Delegation expressed the urge for substantially lowering the 10 percent threshold, as it unnecessarily limits political pluralism.

Further praising was directed to all the people involved in the ballot box committees which took care for the well-organized Election Day and all participating candidates for their overall acceptance of the results of yesterday, which reflect the will of the citizens of this great country.

Mr. Kox stated that contrary to the Elections Day, too many elements in the electoral campaign did not meet international standards and national obligations:

“We are concerned about the seemingly partisan functioning of the Radio and Television Supreme Council and the lack of transparency in the functioning of the Supreme Board on Elections,” said the Head of the PACE delegation. Therefore, Mr. Kox urged to consider this matter thoroughly as the improved functioning of both would increase citizens’ trust in the electoral process.

“The same goes for the need of clear regulations of campaign financing,” stated Mr. Kox, “The Council of Europe, its Assembly and the Council of Europe’s Venice Commission are, as before, most willing and ready to give any assistance needed to improve the electoral process to the benefit of the citizens and democratic institutions of this country”.