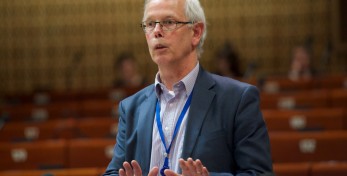 The decision of both houses of Parliament, the State Duma and the Federation Council of Russia, not to present credentials for the January session of PACE would not be seen as a positive gesture, said the UEL President, Mr. Kox and reiterated further that “hopefully the sides would use the time between January and September to overcome tensions, so that from end of this year the Russian Parliament will function again in our Assembly.”

Mr. Kox explained that “credentials can only be presented in each January part session or after general elections. This means the next moment to present the Russian credentials would be after the State Duma elections, at the beginning of the 4th part session in September / October. In between the Russian delegation would not be able to participate in the Assembly’s activities.” If no credentials are presented, they can’t be either reviewed or challenged.