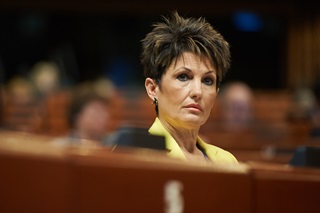 After welcoming the change of the title of the debate on the future of the Council of Europe from its initial title: “the Council of Europe – an organisation in crisis” to “reflect a more positive light on the prospects of the Organisation”, Ms Kavvadia (Syriza, Greece) noted that “it would be far more correct to say that it is not the Council of Europe itself that is in crisis but Europe as a whole – especially the institutional framework of European integration created after the Second World War to ensure peace and promote democracy, human rights, the rule of law and economic prosperity.”

UEL Vice-chairperson asked whether that framework is still “adequate for the challenges facing our continent today, in the 21st century? Can we hide the fact that the EU has suffered a violent amputation in Brexit, that the eurozone is in a state of constant disequilibrium that casts doubt over its viability, that Europe has failed to deal with the refugee and migrant issue in a manner consistent with its values and interests, and that the extreme right is steadily becoming mainstream, along with racist, xenophobic and fascist rhetoric and policies in many European countries?”

Ms. Kavvadia noted that “the Group of the Unified European Left has consistently held a position of principle, offering arguments on the reasons for this great European decline, as we might call it: neoliberalism, social and economic inequalities, the exclusion of vast parts of our populations, the tearing of the fabric of social cohesion, and the use of nationalism as a tool to divert popular anger. However, as a political power in favour of European solidarity, peace and democracy, we offer proposals that are linked to the debate that took place in the Ad Hoc Committee on the future of the Council of Europe and of this Assembly.”

According to the spokesperson “most colleagues would agree that our proposals went a long way towards strengthening both our Organisation, an alternative engine of European integration, and our Assembly, which has rightly been called “the democratic conscience of wider Europe”. We must safeguard our unique system of human rights protection, founded on our main conventions, particularly the European Convention on Human Rights and the European Social Charter.”

In concluding her speech, Ms. Kavvadia posed the following question: “Do we honestly believe that our Assembly can have an impact as a forum of interparliamentary diplomacy if it fails to live up to that title?” She said that “the great advantage of the Council of Europe is that it includes the vast majority of European States. If we forget that advantage and start excluding member States, the only thing that we will achieve is to accelerate the decline of our own Organisation as well.”

“Do we really want to be responsible for that?”, asked Ms. Kavvadia.