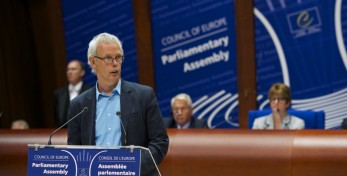 UEL Chair Mr Tiny Kox welcomes today’s decisions of the Rules Committee during its meeting in Paris. The Committee, by a large majority, adopted proposals of Rapporteur Mrs Petra de Sutter which make it possible for Russia and Bosnia and Herzegovina to present their new PACE delegation’s credentials already in June to the Parliamentary Assembly of the Council of Europe and to participate from then, on an equal basis, in all the work of the Assembly. Both countries are at this moment not represented in PACE. Bosnia-Herzegovina was not yet able to decide on the composition of a new delegation after parliamentary elections, whereas Russia did not present a delegation to the Assembly since 2015, after it had become under Assembly sanctions after the annexation of Crimea in 2014.

Last April, the Assembly adopted, with 3/4 majoriy, proposals in the so-called ‘Kox-report’ on the role and mission of the Assembly and the Council of Europe. The Assembly supported Kox’proposal that alle member states have the obligation to participate on both statutory organs of Europe’s oldest and broadest treaty organisation and therefore invited the Russian and Bosnian Parliament so send its new delegation to Strasbourg. Another adopted proposal of the Kox-report called for a new joint reaction mechanism of the Assembly and the Committee of Ministers in case a member state violates the Statute of the Organisation. Both proposals were supported, one month later, in April, by the Helsinki Ministerial Conference. The Rules Committee today took care for the proper implementation of these decisions in the Assembly’s Rules of Procedure.
End of June the Assembly will debate today’s proposals and vote on them. A return to the Assembly of Russia and Bosnia-Herzegovina then would be possible in the same week.