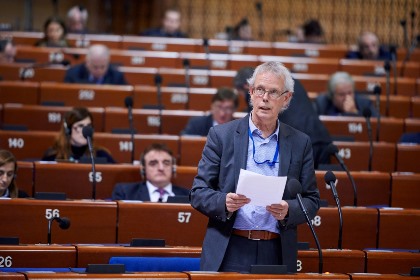 “After five years of absence, Russia finally fulfills its obligation to send a delegation from the Russian parliament to the Parliamentary Assembly of the Council of Europe. This puts an end to the “cafeteria interpretation” on the Russian side that a country itself decides which of the statutory bodies of Europe’s largest and oldest treaty organization it participates in and which does not.” states the chairman of the UEL Group, Mr. Kox.

“After the illegal annexation of Crimea, the Russian delegation was deprived of the voting rights in the assembly. This led to her departure, which was subsequently used as an argument not to admit any rapporteur from the assembly on Russian territory from then on. Important investigations into possible violations of human rights, the situation of the population in Crimea, the functioning of democratic institutions in the largest member state of the Council of Europe, could no longer continue. Nor was the European Human Rights Commissioner able to do her work on the spot. And the payment of contribution was stopped.” clarifies Mr. Kox. According to him, “It became more and more clear that by depriving the Russian parliament of the right to vote, the Parliamentary Assembly had shot itself in the foot: offering an excuse to Russia to stay away in Strasbourg, and to block all cooperation.”

Mr. Kox: “For five years, in the Assembly (of which I have been a member for 16 years), there was frequent talk about Russia but always without Russia, which often led to paralysis of the work. Meanwhile, Russian Foreign Minister Lavrov was able to play and claim his role for five years without any problem in the Committee of Ministers, which represents the intergovernmental part of the treaty organization. Over the years I have continued to point to this total imbalance and ineffectiveness in the Council of Europe, often against the current, because a considerable part of the assembly was caught by new cold war rhetoric. Gradually, however, it became clear that the entire organization was marginalizing itself with this. In addition, there was a greater risk that Russia would step out of the Council of Europe as such (and thereby deprive its inhabitants of the right to turn to the European Court of Human Rights in Strasbourg if human rights were violated).”

To find an answer to this major crisis in the human rights Organization established in 1949, a special committee was set up at the end of 2017 in which all parliaments, including Russia, participated. Based on the results of that committee, Mr. Kox was subsequently chosen by the Assembly as rapporteur to make proposals on the role and mission of the Council of Europe and its Assembly, and to identify the main challenges. The Kox’ report was adopted by 3/4 majority in April by the Assembly. It contains a few dozen areas for improvement, of which a considerable part is already in progress.

Mr. Kox emphasizes that: “most of the attention, however, was drawn by two proposals from my side. Firstly, there had to be an end that countries of their own choice or acting through the Assembly only participate in one of the two statutory bodies. From now on it would apply: you are either in both or none. And whoever participates has equal rights in both bodies. A second proposal concerned the creation of a new response mechanism in the event of a Member State breaching its obligations on the basis of the Staff Regulations or the Human Rights Treaty. In order to guarantee that doing nothing in such a case would no longer be an option, I proposed that from now on the Parliamentary Assembly should be given the right to start a suspension or expulsion procedure, in collaboration with the Committee of Ministers and the Secretary-General of the Council of Europe. The new reaction mechanism is considerably stronger than are the existing unilateral sanctions of the Assembly, which have proved to be ineffective.”

Mr. Kox says explains that “Both proposals were accepted a month later by the conference of 47 foreign ministers in Helsinki. To get that far, it was necessary for action to be taken in various capitals. In particular in Berlin and Paris, but also in the Netherlands. Minister Blok proved to be a solid ally for my plans in this matter. After those plans were adopted, it was then necessary to ensure that they could also be implemented. The involvement of Chancellor Merkel, President Macron and President Putin was useful.” “The necessary decisions have been taken this week. The Russian delegation has been able – with broad support from the Assembly – to present its credentials and they have since been approved. And the Russian members have the same rights and obligations as all other members”, hence Mr. Kox.

“Russia’s return to the Assembly of the Council of Europe can also be a first step towards reducing the confrontation policy that has taken hold throughout Europe in recent years and re-establishing dialogue in all areas where human rights are concerned, in Russia and abroad”, notes Mr. Kox.

“Including a thorough investigation into the possibilities of the Council of Europe to get Russia to cooperate better with the criminal investigation into the downing of MH17 and the deaths of so many innocent victims. That research is now coming, partly on my proposal, and rapporteurs from the Council of Europe can also go to Russia for that. Just like all our other rapporteurs, who have had to wait far too long. The Human Rights Commissioner has since been granted permission to visit Crimea in the autumn and to undertake whatever she deems appropriate. And these days the overdue Russian contribution is to be expected in Strasbourg, just under 100 million euros. This week, the first agreements have also been made on the elaboration of the new response mechanism that I have proposed and which hopefully will become operational soon, which may make Member States more careful. That won’t hurt. The Council of Europe has been in existence for 70 years and that may be celebrated. But only if there is full acceleration to drastically improve the effectiveness of Europe’s largest human rights organization.” as said by UEL chair, Mr. Kox.