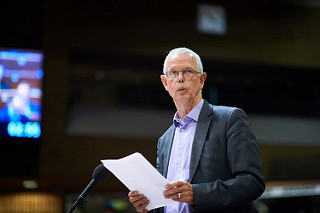 The Parliamentary Assembly of the Council of Europe wants the European Convention-based system at the top of the 2019 summit of the Heads of state and Government of the 47 member States. Today it endorsed this proposal made by UEL Chairman Tiny Kox (SP, The Netherlands) based on his report “Defending the acquis of the Council of Europe”.

According to Mr. Kox’s report daily life of European citizens is influenced by the more than 200 conventions between the Council of Europe member States, adopted since 1949. Kox: “They involve Human rights, social rights, minority rights, protection of women and children. They counter the financing of terrorism, money laundering and human trafficking. They improve the legal structure of our member States, deal with match fixing and doping in sports. They forbid torture and degrading treatment, and organ trafficking. They regulate child adoption and counter threats to public health and ensure data protection.”

Mr Kox added: “This unique common heritage, which effectively and substantially contributes to the de facto uniting of our continent, must be recognized, asserted, defended and, as necessary, further developed, to the benefit of all European citizens and inhabitants and others to whom these conventions are or could be applied”.

In his report Mr Kox proposes an in-depth evaluation on how the convention based system has substantially helped to improve the functioning of the democratic institutions of the Council of Europe. Kox: ‘The conventions have a direct impact on the lives of European citizens and the legal framework of the member states. Yet, huge gaps can be seen between the texts adopted and the reality of our societies, notably regarding the Council of Europe’s human rights conventions and their realization in practice. These gaps are caused in particular by the non-effective implementation of these rights at the national level.”

At the Third Summit of Heads of State and Government of the Council of Europe member States, in 2005 in Warsaw, the need to strengthen the effectiveness of the convention-based system was underlined and measures to achieve this goal were stipulated. Mr Kox stated in his plea:

“From the beginning, in 1949, the raison d’être of the Council of Europe was to achieve a greater unity between its members for the purpose of safeguarding and realizing the ideals and principles which are their common heritage and facilitating their economic and social progress, according to the Council of Europe Statute, thereby focusing on the three major pillars of human rights, the rule of law and democracy. To that end, the Statute established the principle of intergovernmental co-operation, which has since then been central to the Council of Europe’s operations.’

During the debate, Mr. Kox also stated that the effectiveness of the European Court of Human Rights, the assistance programmes, monitoring mechanisms, the European Social Charter and relations between other European organizations and in particular the EU should be evaluated and placed. Therefore on the agenda of the forthcoming summit, as well as the role of the Assembly as the political engine of the Council of Europe. Mr. Kox also proposes to reach out to citizens and let them participate more in the decision-making process of the Council of Europe.

Kox: “There are many reasons to be proud on what has been achieved in seven decades, but there is no reason at all to be complacent or to become ignorant. All what has been built in seven decades could be teared down in one decade, if we do not maintain and improve this unique conventions-system.”