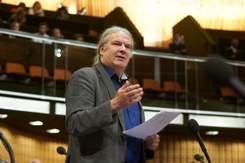 Yesterday, 12 October, the Parliamentary Assembly of the Council of Europe (PACE) held a current affairs debate requested by the UEL Group at the beginning of the Autumn session on “The need for a political solution to the crisis in Catalonia”, opened by Andrej Hunko (Die Linke, Germany).

Mr. Hunko (Die Linke, Germany), observed the controversial vote as part of an international unofficial observation mission on the 1 October Catalan referendum. The mission did not yet fully evaluate the referendum’s legitimacy, legality or significance, but has witnessed unprecedented use of violence against peaceful demonstrators. Mr Hunko praised the strong reaction of fellow Assembly Members who condemned the excessive use of violence by the Guardia Civil. He also supported the Council of Europe Human Rights Commissioner, Nils Muižnieks who called for an independent investigation into the events.

Mr. Hunko said at the opening of the debate: “The solution to the current crisis lies in dialogue. The international community and in particular the Council of Europe have to shoulder their responsibilities. The European Convention on Human Rights obliges us to look at the current crisis as a common problem. There is room for discussion and debate. The Council of Europe has a panoply of tools to offer assistance, including the Venice Commission, which has expertise in constitutional matters, the Commissioner for Human Rights and the Secretary General. I appeal to them all to continue to follow the situation closely and to offer assistance. The Committee of Ministers should also take up the issue.”

He also noted that it is not just among politicians and institutions that dialogue should take place. Society needs to be involved as well.

Vice-chairman of the UEL, Mr. Pablo Bustinduy (Podemos, Spain) stated in the debate that “In a democratic State a political crisis cannot be solved unilaterally or through impositions – certainly not through the use of violence and repression of the population. They need to be solved democratically, through dialogue, negotiation and respect for fundamental rights and freedom.”

The Bureau of the Assembly will send the minutes of the Catalan debate to the monitoring committee for information and follow-up.