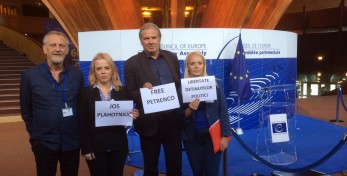 On 22 February 2016, Mr. Petrenco, who already since 6 of September 2015 has been detained in prison, in Chisinau, Moldova, after participating in a protest manifestation against the government’s policy, has been released thanks to national and international pressure. Now, under house arrest, Mr. Petrenco can await the next court hearing which is scheduled for 26 February.

The release took place moments before the start of the fact-finding mission of the Monitoring Committee of PACE led by Mr. Ögmundur Jonásson (Iceland, UEL) and Ms. Valentina Leskaj (Albania, SOC) for the monitoring of obligations and commitments by the Republic of Moldova from 22-23/02/16. The co-rapporteurs had asked for a meeting in prison with Mr. Petrenco, who is a former vice president of UEL in PACE.

The UEL Group welcomes the first steps taken to change the preventive measures, but calls on the total release of Mr. Petrenco.