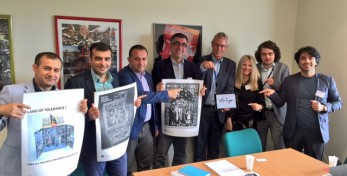 Former political prisoners from Azerbaijan, amongst who Vaclav Havel Human Rights Price winner Anar Mammadli and well known human rights activist Rasul Jafarov, met in Strasbourg with UEL Chair Tiny Kox, to promote with him a new campaign to get Mr. Ilgar Mammadov, outspoken opponent of president Aliyev, out of his prison in Azerbaijan. The European Court on Human Rights already ruled long time ago that Mr. Mammadov’s imprisonment is illegal. The Council of Europe Committee of Ministers has repeatedly urged the Azerbaijani authorities to release him and the COE Secretary General Jagland has opened a special procedure against the country to force it to end the illegal imprisonment of Mr. Mammadov, who was sentenced in 2014 to seven years in jail.
Recently a considerable number of political prisoners were released in Azerbaijan, due to continuous international pressure. Amongst them Leyla and Arif Yunus, who now live in the Netherlands where they received this year political asylum.