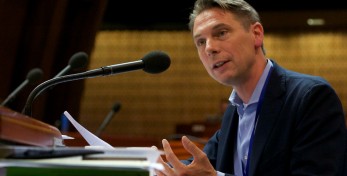 There is no doubt that growth can go hand in hand with a reduction in income differentials and the greening of the economy, a point of view which UEL member Tuur Elzinga, rapporteur for the Parliamentary Assembly of the Council of Europe (PACE), and Angel Gurria, Secretary-General of the Organisation for Economic Cooperation and Development (OECD) both share. M Elzinga’s almost unanimously supported resolution called on the OECD countries to strive for inclusive growth with a fairer division of income and wealth.

The resolution also called for the raising of low and middle incomes in order to stimulate the economy, strengthening of collective bargaining, increases in minimum wages and the countering of flexibilisation of the labour market, placing restraints on the financial sector, combating tax avoidance and tax evasion, making economies more sustainable, and marking time when it comes to trade treaties such as the Transatlantic Trade and Investment Partnership (TTIP) and the Comprehensive Economic and Trade Agreement (CETA) with Canada.

‘TTIP, the trade and investment treaty which the EU is currently negotiating and attempting to conclude with the US, could perhaps bring a little additional growth in the far future. But the costs are great,’ argued Elzinga. ‘Not only for democracy and our freedom to make our own rules, but also possibly for the stability and sustainability of our economy and for employment, wages and the division of incomes. These so-called trade-offs should first of all be subject to thorough investigation by the OECD.’

PACE, enlarged by the presence of delegations from OECD countries outside Europe, debated this week at its plenary meeting in Strasbourg a report by M Elzinga on the OECD’s activities. In his own speech, Angel Gurría praised UEL member Tuur Elzinga for his thorough and thought-provoking report.

‘I was appointed rapporteur last year by PACE, but the report is actually a sort of “state of play” in a dialogue between Gurria and myself which goes back to 2008,’ explained M Elzinga. ‘Since that year, in regular meetings, I have called for a fundamental rethink of our economic models and policy goals. That eventually led to an organisation-wide process of reflection under the title New Approaches to Economic Challenges. And the result which has emerged is that the OECD is now more focussed on a broader concept of prosperity and on inclusive and sustainable growth.’