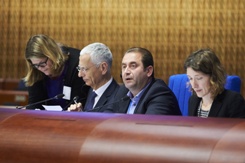 Mr Loukaides: ‘In its last meeting members of the sub committee asked for a clear reaction from the Assembly to the announcement of the Israeli Prime Minister Netanyahu on possible annexation, from 1 July 2020. Any unilateral act by Israel leading to annexation of Palestinian territory, would mean a most severe violation of international law, as was already publicly stated by UN Secretary General Guterres and EU High Representative Borell. It is very important that our sub committee and our Assembly join these statements with our own warning to the Israeli government to refrain from any unilateral act which goes against international law.’
In conclusion, Mr Loukaides, stated: ‘As is mentioned in the statement of the PACE President, the Assembly, and its sub committee on the Middle East And the Arab World, in which parliamentarians from both Israel and Palestine participate, are at the disposal of both countries to seek a peaceful solution for this huge conflict.’