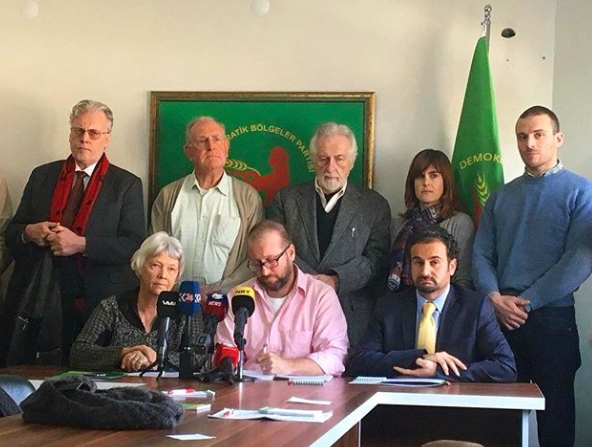 Two Members of the UEL Group, Ulla Sandbaek (Denmark) and Miren Gorrotxategui (Spain) visited Turkey between 13-19/02/2017 as part of the international peace delegation consisting of 10 members from Europe and North America, including Members of European Parliament and of the Council of Europe, academics, and journalists. The visits to Diyarbakir and Istanbul were organized by the EU Turkey Civic Commission (EUTCC) who enabled the delegation to witness and gather information about the dire human rights’ situation in the country.

At the UEL Group meeting during the second part session, four Members of the delegation, Ulla Sandbaek (Denmark), Miren Gorrotxategui (Spain), Federico Venturini (International Social Ecology Institute Consultory Board Member) and Jeffrey Thomas Milley (Cambridge University Faculty) informed that their request for a meeting with the leader of the Kurdish Freedom Movement, Mr. Abdullah Öcalan to the Turkish Minister of Justice has been ignored.

Apart from Mr. Abdullah Öcalan, who has been imprisoned and isolated in inhumane conditions on Imrali Island for eighteen years now, and who is a crucial role player in the peace process, the delegation also attempted to visit the co-chair from the People’s Democratic Party (HDP), Mr. Selahattin Demirtas, currently imprisoned unconstitutionally in Edirne.  Its request was also rejected.

Members from the delegation have come to Strasbourg to distribute the report about the disturbing findings after their visit to Turkey.  “We were here for the debate in the Parliamentary Assembly of the Council of Europe about the situation in Turkey, and we applaud the decision to place Turkey back under monitoring”, said Ms. Gorrotxategui (Spain).

Ms. Gorrotxategui (Spain) told that “while being here, we have met with the Council of Europe’s Secretary General, the Human Rights’ Commissioner, as well as members of various parliamentary delegations in order to stress that there can be no democracy in Turkey without a peaceful resolution of the Kurdish question”.

The delegation holds the opinion that now is an opportune moment for European institutions to pressure the Turkish authorities to comply with European norms and human rights conventions and standards.  In line with the UEL’s opinion the delegation emphasized that the lifting of immunity of 55 of the 59 parliamentarians for the HDP, a party that represents close to 6 million voters, must be reversed. The delegation also reiterated that MP’s of HDP, including its co-chairs, Mr. Selahattin Demirtas and Ms. Figen Yuksekdag, who were unlawfully detained, must be released.

The delegations further called upon the CPT to issue a declaration of non-compliance of the Turkish authorities with its recommendations, in accordance with Article 10.2 of the European Convention for the Prevention of Torture, in regard to the isolation of Mr. Öcalan. “We would like to remind the European authorities about the ECHR’s unanimous ruling in the March 2014 case of Öcalan vs. Turkey, in which the court ruled that Mr. Öcalan’s sentence to life imprisonment without any possibility for release violates article 3 of the European Convention of Human Rights”, said Ms. Sandbaek (Denmark), “we call upon the Council of Europe’s Committee of Ministers to monitor the implementation of this decision, and to include compliance with this decision among the conditions for ending the monitoring process”.

More information can be found below:

Press conference:  The Peace process as the necessary condition for democracy in Turkey (conclusions of the Imrali delegation)

Motion for a resolution | Doc. 13980 | 05 February 2016: Resolving the ongoing conflict in Turkey and finding a political solution to the Kurdish question