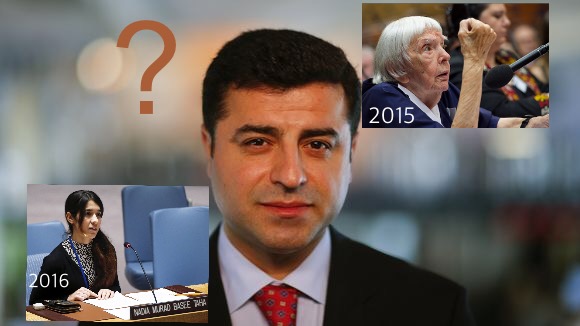 The Group of the Unified European Left at the Parliamentary Assembly of the Council of Europe (PACE) is honoured to announce the nomination of Mr. Selahattin Demirtaş for the 2017 Václav Havel Human Rights Prize. The Prize is awarded each year by the PACE to reward outstanding civil society action in the defence of human rights in Europe and beyond.

The Group of the Unified European Left at PACE would like to thank all the sponsors for supporting the nomination of Mr. Selahattin Demirtaş for the Vaclav Havel Prize:

The UEL Group believes that the nominee greatly deserves the recognition of his enduring struggle in the name of human rights and especially in the name of the rights of the Kurdish population.

The biography of Mr. Selahattin Demirtaş shows that since a very young age, seeing what was happening then in Turkey, he mindfully has chosen his vocation – the defence of human rights, long before his political awakening. The path towards better protection and development of the Kurdish rights, as well as more justice in his country has proven to be very difficult.

Currently imprisoned in Edirne and being in poor health conditions, Mr. Selahattin Demirtaş continues to fight from prison by means of hunger strikes in solidarity with the protest actions of political prisoners across Turkey whose rights severely were restricted after the failed July 15 coup. Mr. Selahattin Demirtaş is a figure admired all over Turkey by people from very different backgrounds and it is a privilege to present the nomination of such a devoted person who gave and continues to give hope to thousands of people.

There is no prize which can adequately compensate the struggles of true human rights advocates who dare to risk their lives for the cause they believe in and to bear the responsibility for their actions everywhere they are. However, the UEL Group is convinced that the Václav Havel Prize, which Mr. Selahattin Demirtaş justly deserves, would be a worthy recognition of the merits and actions undertaken since the early start of his vocation as human rights defender.

The Václav Havel Human Rights Prize, which will be awarded on 9 October 2017 in Strasbourg, consists of a sum of €60,000, a trophy and a diploma.