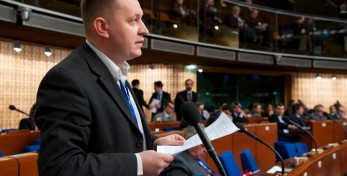 On 28/6, Mr. Grigore Petrenco, former vice-chairman of the Group of the Unified European Left was sentenced to 4,5 years with suspension of 4 years probation period. All the defendants from the so called “Petrenco group” were found guilty for taking part in “mass riots” and were sentenced from 3 to 4,5 years as well.

The UEL Group sees this verdict as a clear intimidation of all opposition forces and although it is content that Mr. Petrenco has not been put in prison, the Group is foremost very disenchanted with the judgment which is clearly political and will lead to the exclusion of an opposition party taking part in future parliamentary and local elections.

Therefore, the UEL Groups hopes an appeal will be made against this court decision which clearly violates fundamental rights and seriously limits space for legal political activities.

The Group of the Unified European Left calls on the whole Moldovan political community to address the broad question on how to avoid that parliamentarians, politicians and activists end up in prison after participating in peaceful manifestations.

During the recent summer part session of PACE, the UEL Group was able to question the Prime Minister of Moldova Mr. Filip with regard to the possibility of Moldova becoming a country with political prisoners. The Group also held an exchange of views on this matter with Mr. Lupu, the chairman of the Democratic Party, which is the largest party in Moldova.