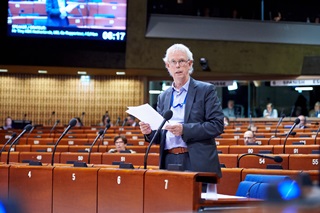 The Group of the Unified European Left has put a current affairs debate on the Turkish military intervention in Syria on the PACE agenda of the January session. Today, Mr. Kox, opened the debate in which he pointed out that “instead of contributing to restoration of order and peace, the Turkish authorities put extra fuel on the fire, by starting a unilateral military intervention into Syria.”

He noted that “This Assembly, which has shown our deep concern already with everything that is happening in Syria, can of course not cast a blind eye on new developments over there, which will lead to more atrocities, more wounded, more killed and more displaced citizens. Once again a political dispute leads to a violent reaction, and will add to the already huge threats of the Syrian conflict to regional and international security”.

Besides calling upon the Turkish authorities to immediately stop its military intervention into Syria and to respect the Charter of the United Nations, and to look for political ways to solve political problems, including security needs, Mr. Kox emphasized that the Assembly should again act instead of looking away from new atrocities in this ongoing war and proposed 3 other actions for the Assembly: