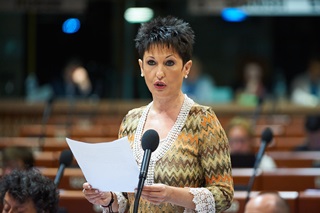 During the PACE January part session Ms. Anneta Kavvadia (Greece, Syriza) spoke on behalf of the UEL Group on the progress report of the PACE monitoring procedure. In her speech she pointed out that the monitoring process is one of the most important and useful functions of PACE. She also underlined that it offers a tool with serious impact in the fulfillment of the obligations of the Member states in the areas of democracy, human rights and the rule of law.

Ms. Kavvadia (Greece, Syriza): “These are precisely the areas that are most threatened by the existential crisis that Europe is facing in our times. There can be no denying it, Europe is once again becoming a fragmented continent. Fragmented in economic and political terms, between rich and poor, between creditors and debtors, between countries that are receiving refugees and migrants and countries that refuse to share the burden. The values upon which this Organization was built are being eroded. Now we see the dark vision of fascism, the extreme right, racism, xenophobia and nationalism raise its ugly head once again, not in the fringes of politics, but in mainstream political parties. Have we Europeans forgotten the pain and suffering caused by these monsters in our history? I sincerely hope not.”

Furthermore, the vice-chairwoman mentioned Greece and stressed that: “Our country remains committed, to continuing reforms that will strengthen the rights of those that need them the most: the disadvantaged, those hurt by inequality, poverty and exclusion, LGBT people, refugees and migrants, among others. In this endeavor, we will continue to count on the support, assistance and positive contribution of the Council of Europe and of the Assembly.”

Ms Anneta Kavvadia speaking in the debate on the progress of the Assembly’s monitoring procedure (January-December 2017) and the periodic review of the honouring obligations by Estonia, Greece, Hungary and Ireland