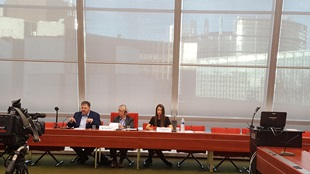 During the PACE January part session the UEL Group invited Mr. Ruslan Kotsaba, a Western Ukrainian journalist and blogger, who had been previously convicted on treason charges, to hear about his case during its Group meeting.

Mr. Kotsaba was sentenced to two years in prison after calling on Ukrainians to refuse being drafted into the civil war. After his arrest which is a clear example of the violation of article 10 of the European Convention on Human Rights which guarantees the freedom of expression 21 Members of PACE called for an immediate release of Ruslan Kotsaba in a written declaration issued during the PACE third part session in 2016.

Since being freed, Mr. Kotsaba has been an outspoken opposition voice who recently has been assaulted in the street by right-wing hooligans and has now come under threat of arrest facing a trial on 31 January.