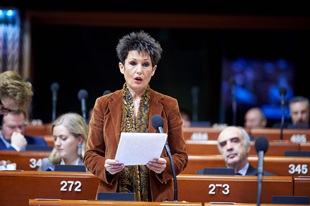 “The Israeli – Palestinian peace process is one of the emblematic initiatives taken up by the Council of Europe, since it stands as a standard paradigm of Human Rights issue”, said Ms. Kavvadia (Greece, Syriza) on behalf of the UEL Group in the debate under urgent procedure during the First January Part Session of PACE, while remarking that this process has stagnated in the last years. The UEL Vice-chairwoman stated that “it seems that the turbulent events of the last years in the whole area and the law of the strongest have reigned to a dispute that does not seem to reach a positive solution in the nearby future”.

In her speech, Ms. Kavvadia mentioned that “in the past there have been several reports devoted on the Israeli-Palestinian peace process, but there is still a long way to go. Currently there are protesters who are convicted massively, even if they are minors”. The example given during her intervention of Ahem Tamimi (16), who was arrested for slapping an Israeli soldier and is still in prison facing a military court is just one of the dozens cases.

Ms Kavvadia pointed out that “in the operational frame of the Council of Europe and the Assembly, initiatives are to be taken up once again, to urge for initiatives in the field and factfinding visits that will help us support people in need, see that authorities operate according to international law and human rights are not violated”. She continued that “in that context, honest exchange of information can begin and eventually a restart in the peace process in the area.”

The conclusion the vice-chairwoman gave was clear: “No one has the right to remain silent. We all recognize that the solution for peace in the Middle East must be based on a two-state solution, with safety and security for all Israeli and Palestinian citizens and an absolute respect for freedom and human rights.”

Ms Anneta Kavvadia speaking in the urgent debate on the Israeli-Palestinian peace process: the role of the Council of Europe