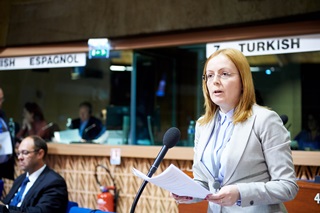 During the PACE January part session Ms. Inna Supac (Republic of Moldova, PCRM)  spoke on behalf of the UEL Group within the free debates. She informed PACE members regarding the situation in this country which is under the monitoring of the Council of Europe.  In her speech she pointed out that today all the state institutions in the Republic of Moldova are controlled by the ruling Democratic party and its leader Vladimir Plahotniuc. Among them there are the General Prosecutor’s Office, the Anticorruption Centre, the Central Electoral Commission and the Constitutional Court.

According to her information, during the last 3 years in Moldova, 38 MPs have quitted their parties and joined the government. Moreover, today almost 600 of mayors are already members of the ruling party, although in the last local elections in 2015 the representatives of the Democratic Party were elected as mayors only in 287 localities. Ms. Supac shared opinion that the recipe of such an «attractiveness» of the Democratic Party for MPs and local elected representatives is a simple one – money, pressure, intimidation. The recent example is the second largest city Balti where the local councilors even went on a hunger strike protesting against the governmental pressure on them.

Ms. Supac also reminded that Democratic Party from Moldova neglected the recommendation of the Venice commission and have changed the proportional electoral system into a mixed one. Moreover, recently the Central Electoral Commission has refused to register the common initiative of the civil society and opposition parties regarding legislative referendum on cancellation of the mixed electoral system.

Hence, during the Free debate the UEL Group called on the PACE co-rapporteurs on Moldova to investigate thoroughly and quickly how the democratic principles in Moldova can be protected, taking into account the recent recommendations and opinions made by the Venice Commission.