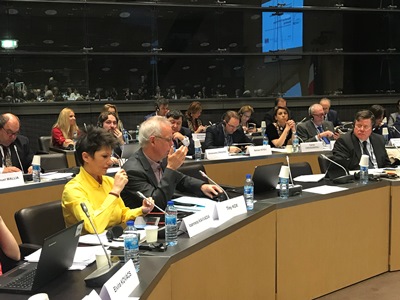 On 16 March, the Standing committee meeting took place in Paris. The Members of PACE discussed the future of the European Human Rights Convention (which applies to all 830 million Europeans, from Iceland to Russia and from Portugal to Turkey) and the European Human Rights Court. Plans to restrict the operation of the Convention and the jurisdiction of the Court are under way. The foreign ministers of the 47 member states will soon discuss a proposal from the current right-wing government of Denmark, currently chairing the Council of Europe. During the discussion with the President of the Human Rights Court, Mr. Raimondi, UEL chairman Mr. Kox (SP, The Netherlands) stressed the importance of the current human rights protection for all Europeans – and for all Member States. President Raimondi responded with approval and called the Convention and the Court the best insurance against the threat of tyranny and lawlessness in Europe. During the meeting a declaration with a re-commitment to the functioning of the Human Rights Convention and the jurisdiction of the Court was unanimously adopted . Mr. Kox called on all delegations to discuss this statement in all national parliaments before the governments of the 47 Member States take their decision by mid-April, a call carried by unanimous support.