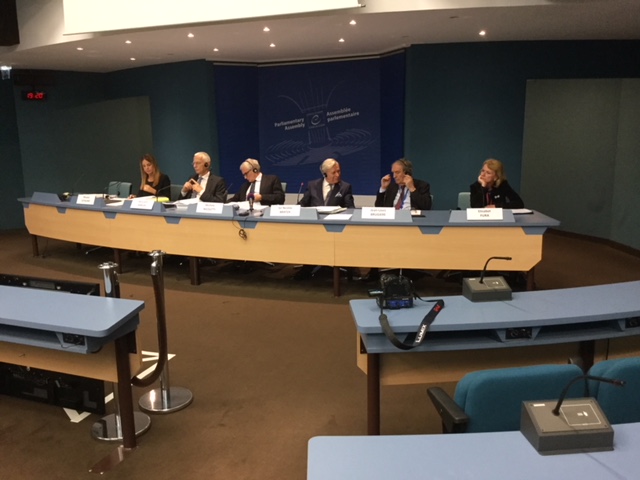 Statement UEL on follow up of report on allegations of corruption within the Parliamentary Assembly of the Council of Europe:

Urgent appeal to Assembly to restore its credibility

The Group of the Unified European Left (UEL) urgently appeals to all its colleagues in the Parliamentary Assembly of the Council of Europe – including all of its political groups and national delegations – to spare no effort to restore the credibility of the Assembly, after the findings of the Independent Body on the allegations of corruption within the Parliamentary Assembly.

UEL welcomes the report of the external investigation body and expresses its appreciation to the work done by Sir Nicolas Bratza, Mr Louis Brugiere and Mrs Elisabet Fura.

UEL – which was amongst the very firsts to ask for the inquiry – notes with regret that it took quite a long time before PACE as a whole was convinced such an inquiry was the only appropriate way to react to the allegations. UEL hopes that in any future case the Assembly will be able to act faster and in a more transparent way.

UEL finds it shocking that according to the findings of the report, a former President of PACE has been involved in corruptive activities, as well as a former President of one of our political groups. By doing so, they have discredited the Assembly as a whole and caused great harm to the Council of Europe as such.

UEL is also shocked that five former Members, amongst who a former Member of the UEL Group, appear to have acted, after they left PACE, as paid lobbyists for a member State and therewith have gravely misused their position as honorary member of this Parliamentary Assembly and also caused great damage to the Council of Europe.

UEL notes with regret that some Assembly members have seriously breached the Assembly’s Code of Conduct according to the report.

UEL finds it appalling that, according to the report, at least one member state has tried to inappropriate influence discussions and decisions, using – amongst others – bribes given to members and former members. Other member States have been mentioned that they too might have tried to inappropriate influencing of our decision making. All governments should fully respect the independency of the Assembly instead of trying to manipulate it.

UEL calls upon the national Parliaments to consider whether the findings of the report need further investigation by national authorities. National Parliaments should also consider whether – in the light of the report’s contents – re-composition of the delegations to PACE would be appropriate. First and foremost the call goes to the Spanish Parliament with regard to the former PACE President, who was found related to  corruptive activities. It would be a disgrace if this person would be allowed to stay any longer a member of the Assembly which he discredited so seriously.

UEL deeply regrets that great and avoidable harm has been done to the credibility of this Parliamentary Assembly, its Members and the Council of Europe as such by some of our Members and former Members and at least one Member State.

The UEL Group urges PACE to spare no effort to restore credibility as guardian of human rights, rule of law and democracy in Europe and to take all appropriate measures necessary, taking into account the proposals made by the external investigation body in this respect. UEL hopes and expects that the now published report will be of great help to stimulate efforts to restore PACE’s credibility.

The UEL Group is committed to continue to do its utmost in this respect and expects the same from the other political groups, national delegations and individual Assembly-members. From now there should be zero tolerance to any further discrediting of the Assembly and the Council of Europe.

Chairman of the UEL Group

Actions by the Bureau in response to the report of the investigation body:

In response to the report of the investigation body, the Bureau of the Assembly today (22/04) decided to:

– invite the Committee on Rules of Procedure, Immunities and Institutional Affairs to consider further possible actions;

– invite the Committee on Rules of Procedure, Immunities and Institutional Affairs to ensure proper follow-up to the recommendations for the Assembly’s ethical framework made in the report.