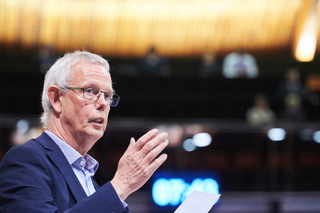 The Group leader of UEL has addressed the Turkish Minister for foreign affairs in writing. Mr. Kox called on the Minister, Mr. Mevlüt Çavuşoğlu, who is also PACE’s honorary president, to avoid a military operation as it goes counter international law.

He also called upon the Secretary General of the Council of Europe, Marija Pejčinović Burić and the chair of the Committee of Ministers Amélie de Montchalin, France’s Secretary of State in charge of European Affairs, to closely monitor the developments concerning the situation in Northern Syria following the statements of Turkish authorities about an upcoming invasion of Turkish military into Northern Syria.

Mr. Kox asked the leaders of the Council of Europe to reach out to Turkish authorities in order to prevent the threat of military action.