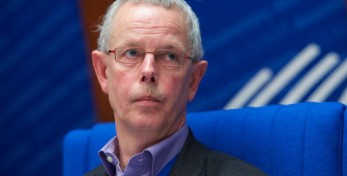 On a proposal of UEL Chair M Tiny Kox, an investigation will be carried out into whether recent legislation passed in Ukraine, which is leading to bans on left parties, conforms to the rules of the Council of Europe. Ukraine, in common with all other European countries, is affiliated to this organisation and every member state is obliged to ensure that its laws do not transgress human rights or the rules for a democratic constitutional state.

Following the latest elections, a bleak right-wing wind has been blowing through the parliament in Ukraine. A large-scale purge has meant that everyone in any way associated with the previous regime, ousted at the beginning of 2014, has had his or her life made impossible. According to Council of Europe legal experts, the legislation which has created this state of affairs is unsuitable and must be adapted. Laws have been introduced which make it possible to ban left parties on the basis of their positions, symbols and history. Similar legislation in neighbouring Moldavia was recently declared unacceptable by the Council of Europe, a judgment which led to the country amending it. A proposal from Kox to ask Council of Europe legal experts to give an opinion on the Ukrainian legislation won broad support during a meeting of the Parliamentary Assembly of the Council of Europe (PACE) held this week in Sarajevo.

In October elections will once again take place in Ukraine, this time for local authorities. These elections must, in line with the Minsk Agreement, cover the whole country, including the rebel eastern areas. Whether that will actually happen is now the question. The government in Kiev has moreover decided that in 120 council districts the situation is too unstable for elections to be held. A number of parties in parliament disagree with this and consider it an attempt to limit losses on the part of the two biggest governing coalition parties. According to the polls, President Petro Poroshenko and Prime Minister Arseniy Yatsenyuk are in trouble. The biggest opposition party is said to be a victim of manipulations which exclude it from participation in areas where traditionally it has extensive support. The Communist Party is completely banned from participation on the orders of the government.

In Kox’s view things in Ukraine are going from bad to worse. ‘It bears as things stand no resemblance to a functioning constitutional state, while the cease-fire in the east is extremely shaky. A lot of people have lost their faith in the government but their ability to elect someone else is being restricted unacceptably by the current parliamentary majority. I assume from all of this is that the legal experts at the Council of Europe will produce a damning ruling. Let’s hope that this leads to some reflection in Kiev. Ukraine needs more democracy not less if it is to get on top of its enormous problems.’