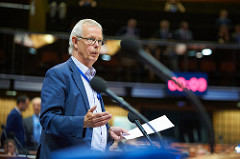 His decision comes very late. If president Agramunt would have done what he promised (to immediately resign when his EPP Group would no longer show confidence in him) we would have been able to elect a new President months ago.

The irresponsible behaviour of president Agramunt has caused a lot of damage to the credibility of the Assembly. Nevertheless I welcome his stepping down now, as it will avoid the need of the Assembly to officially dismiss a President.

I hope that this decision will allow the Assembly, the Assembly’s Bureau and the Presidential Committee now to concentrate on our core business: protecting and promoting human rights, rule of law and democracy in all COE Member States.