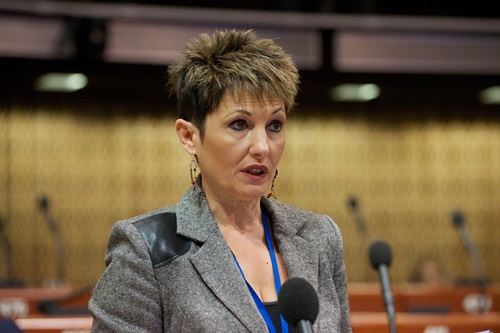 On Tuesday, June 26, UEL vice-chairwoman Ms. Kavvadia (Syriza, Greece) praised Syria’s neighboring countries for their approach to refugees in the debate on the humanitarian situation of refugees in the countries neighboring Syria. “These countries are giving a lesson to Europe: a lesson in humanitarian principles, in solidarity, in organizing a proper response to such a large scale crisis”, said Ms. Kavvadia.

Ms. Kavvadia being from Greece, a country that “regardless of her own serious problems, did offer and is still offering shelter to tens of thousands of people, a huge number proportionately to her population”, criticized that “the entire European continent, perhaps the most prosperous group of states in the world, has found it impossible to shelter, absorb and integrate even a small fraction of the refugee populations that reside in these countries.” She noted that this approach resulted in slave markets in Lybia, where people were displayed and sold like livestock.

The UEL vice-chairwoman reminded that if thinking in short-term measures “more aid must be given to Syria’s neighboring countries in order to cope with immediate needs.” “The tone, however, must be set by the EU, that could easily decompress the situation by allowing relocation of refugees in its territory, and take up initiatives to stop the war”, said Ms. Kavvadia, while pointing out that “the “Fortress Europe” approach will not solve the problem.”