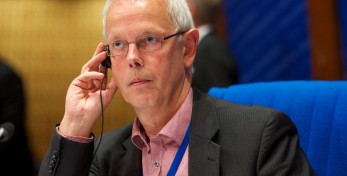 The deal between the European Union and Turkey about the returning of refugees is in contradiction with human rights and international law. This has been stated by the Parliamentary Assembly of the Council of Europe in the adopted resolution. UEL Chair Tiny Kox hopes that the EU will consider seriously the criticism, “this week the President of the European Commission told the Assembly that he considers the Council of Europe as the most important touchstone of human rights in Europe. Well, it has been examined and the result is: this deal is no good”!

The Assembly came to its verdict after a week of debates on the controversial agreement which should keep refugees away from Europe, in exchange for billions of euro in aid for Turkey. Both Juncker, President of the European Commission and the Turkish Prime Minister Davutoğlu tried to convince the Assembly that the deal was alright. The verdict of the European Human Rights Commissioner Nils Muižnieks sounded, however, very differently. He wonders if the agreement is illegal and immoral. Mr. Kox: “It cannot both be true. In case the Council of Europe wants to keep being respected, it should be strict in respect to the EU, which members are also all members of the Council of Europe. And it should be strict in respect to Turkey, which also is a member party to the Council of Europe but currently, is definitely not behaving accordingly. If it is indeed the case that we are a touchstone when it comes to human rights, then one should listen to our resolution!”

Kox: “I am very pleased that a majority of the Assembly supports the call of its rapporteurs, Tineke Strik (Netherlands, SOC) and Annette Groth (Germany, UEL), namely, to better protect especially the Syrian refugees and not to send back to Turkey refugees as long as no legal guarantees are given about their legal protection. Of course it is good that we are trying to manage the flow of refugees in the right direction and prevent abuses. However, simply sending back people to a country that does not considers seriously human rights and attacks and forces to flee its own Kurdish citizens, is no good. And if we really want to do something structurally sustainable, we must ensure that the war in Syria stops and Turkey no longer is misbehaving. So: no bombs but international consultation, no shady deals but respect for international law. “

Furthermore, the UEL group has sharply criticized the address of the Turkish Prime Minister Davutoğlu in the Assembly. Mr. Kox: “The Prime Minister often indulged in shameless propaganda, left no time to really engage in debate with the Assembly, and was unseemly towards the representative of our group, Ertuğrul Kürkçü, who criticised the Turkish government. Meanwhile, there were a lot of Turks who are not members of our Assembly sitting as applauding audiences for the Prime Minister in the plenary Chamber. All reasons to call his address far below the mark!”