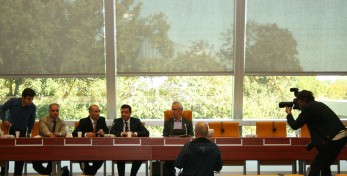 “Our fellow colleagues of the UEL-group from the Turkish HDP party have again been condemned to scandalous prison sentences. No democracy is ever possible without an opposition, but our colleagues from the HDP-party are prevented from doing their work as parliamentarians”, stated the UEL chairperson. That’s why the UEL Group demands the immediate release of the HDP co-chairs and other deputies in Turkish prisons. The HDP represents six million voters in Turkey who are struggling to establish a democratic future. Turkey should show their respect for the Human rights and fundamental freedoms from the binding ECHR, which Turkey signed as well.

The President of the Unified European Left in the Council of Europe is taking part in a call for the immediate release of imprisoned colleagues, together with fellow MPs and scientists from Europe and America. The Group hopes that many other colleagues and PACE members will join this call.

On the website of the HDP-party, the party also demanded the release of the HDP co-chairs and other deputies: