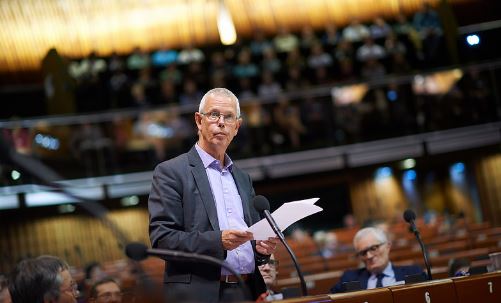 In the broadcast of the Alex Salmond Show from the 4th of January 2017 Mr. Tiny Kox, chairman of the UEL-group, was interviewed about the future of the Council of Europe.

During the autumn session of PACE, when the recording of the interview took place, a report on “Defending the acquis of the Council of Europe: preserving 65 years of successful intergovernmental co-operation” written by Mr. Kox was adopted. According to Mr. Kox the  European Convention on Human Rights, the foundation on which the Council of Europe is based, is the most far reaching convention with regard to human rights, democracy and the rule of law that has ever been drafted and adopted.

The currently 221 conventions which are most relevant and intervene in the lives of 835 million people cover a wide range of subjects. The Statute names in particular human rights and fundamental freedoms, and economic, social, cultural, scientific, legal and administrative matters. Today, over 160 conventions are open to non-member States and some have acceded to a number of these conventions.

Mr. Kox: “In the end both our governments and parliaments will realize that a convention-based system, where you have a flexible position of governments to join or not to join is at most value for a democratic and rule of law-based Europe. And in this huge Europe it’s very difficult to find rules that can be applied immediately in all the member states. So every member state has the right to decide whether they want to join a convention. It’s a far more flexible system than the EU. But there is a problem in the implementation of the conventions and the verdicts of the ECHR.”

Furthermore Mr. Kox told about Spain and the fact that democracy, the Rule of Law, the Spanish constitution and the will of the people don’t always go along. “Sometimes there are confrontations and there is nothing wrong with that”, he stated.

Mr. Kox stated that during a possible summit of the Council of Europe, “our Heads of States or governments will have to decide whether they think we should maintain and continue the convention-based system of the Council of Europe”. To prepare the summit, an Ad Hoc committee was set up with the mandate to discuss the future functioning of the Assembly, including the need to harmonize the rules of the two statutory organs, Committee of Ministers and Assembly. It will meet during the upcoming January session (22/01-26/01/2018) and report to the Assembly before the end of 2018.

The interview ended by one last statement of Mr. Kox: “If our governments take the Council of Europe and its conventions serious, they should put their money where their mouths are”.

See here the Interview with Mr. Kox (his interview starts at 14:54):  https://www.rt.com/shows/alex-salmond-show/414970-council-europe-strasbourg-parliamentarians/