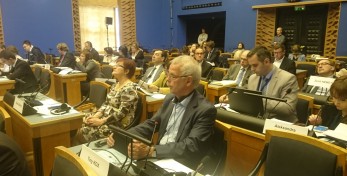 While meeting with the new Chair of the Council of Europe Committee of Ministers in Tallinn today,  UEL Chair Tiny Kox welcomed the release of Ukrainian MP and member of the Parliamentary Assembly of the Council of Europe Nadia Savchenko. He also said to be glad with this week’s release of Azerbaijani investigative journalist Kadija Ismaiylova, who was imprisoned for political reasons by the Azerbaijani authorities. As he stated: ‘Politicians should not be in prisons but in parliaments, and journalists should be able to criticize politicians instead of being imprisoned by politicians’.
In the same line he asked Estonian Foreign Affairs Minister Kaljurand, who now chairs the COE Committee of Ministers to get into contact with the Turkish government to prevent members of the Turkish Parliament to be arrested and to end the imprisonment of critical journalists in Turkey. Due to new legislation in Turkey, 50 of 59 members of HDP Party, amongst who members of UEL in PACE, could lose their parliamentary immunity and put to trial for political reasons. Also other Turkish PACE members are threatened by the new legislation. Minister Kaljurand said she understands the problem and would address the issue with the Turkish authorities.