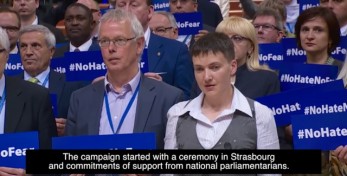 UEL Chair Tiny Kox welcomes the presence of Ukrainian MP Nadia Savchenko in the plenary meeting of the Assembly in Strasbourg, which was possible after her release from Russian imprisonment, after she was pardoned by the President of the Russian Federation: ‘We all called for her release as politicians should work in parliaments, not sit in prisons. Our calls have been effective. I hope we now will show the same solidarity with Khalida Jarrar, who is one of our members from Palestine. She, too, was recently released from prison, by Israel, but still is not allowed by Israel to travel to Strasbourg. If we exert enough pressure in her case as well, then she might be with us when we meet again in Strasbourg in our October session.’ He also called for solidarity with the MPs from HDP in Turkey, who have seen their immunity lifted and are threatened with imprisonment in the near future. During the session the endangered future of many MPs in the Turkish Parliament was voiced in a very critical resolution on the functioning of democratic institutions in Turkey. The draft resolution was enriched during the vote in the hemicycle with many amendments proposed by UEL members, amongst who members of HDP.