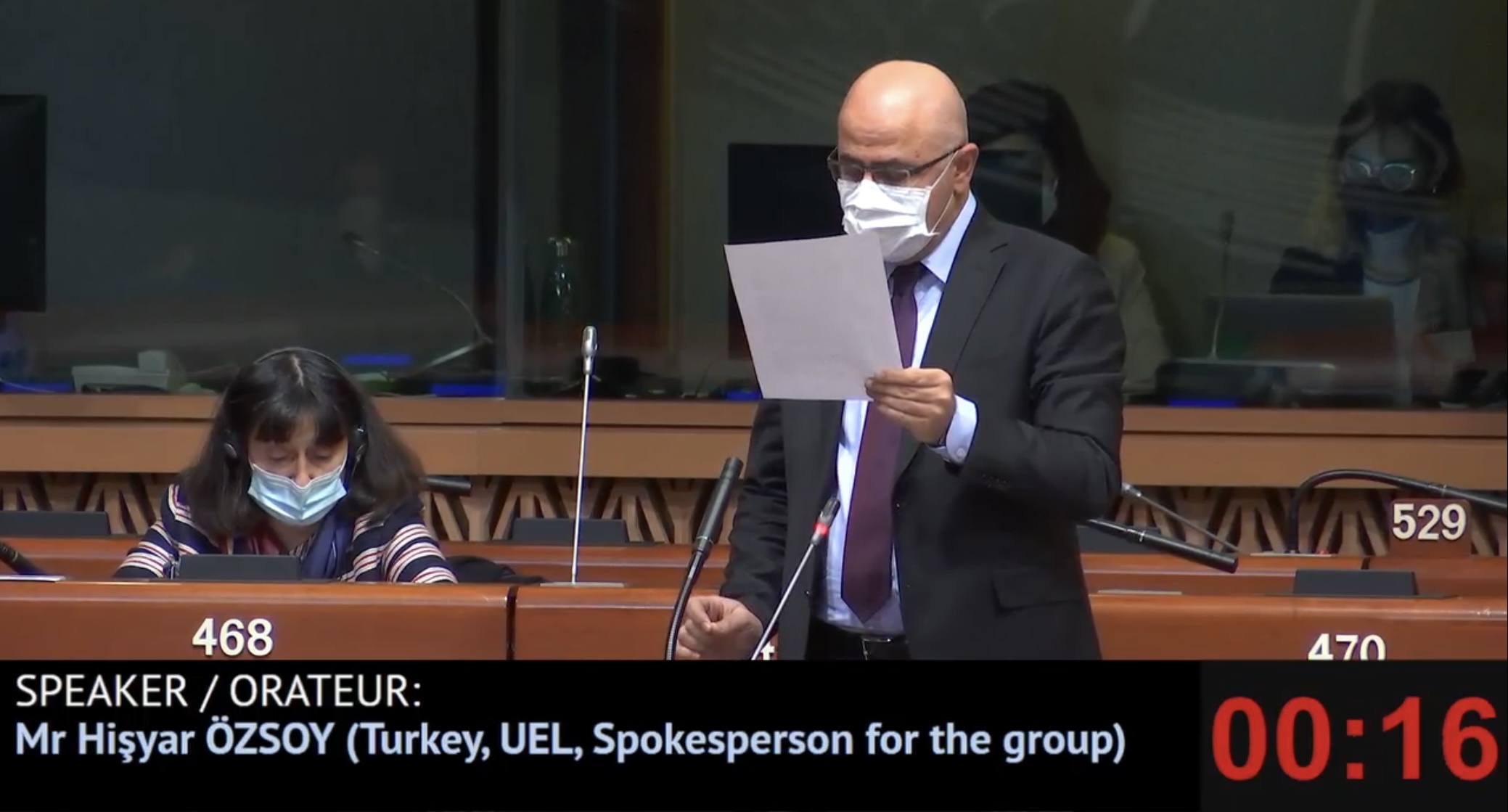 Today, the Vice-chairman of the UEL group Mr Hisyar Özsoy spoke on behalf of the Group in support of a resolution that has been presented by Mr Thomas HAMMARBERG and Mr John HOWELL on behalf of the Monitoring Committee during the debate under urgent procedure: The functioning of democratic institutions in Turkey.

The UEL Group agreed that Turkey must be encouraged to improve its policy and that requires better coordination of CoE bodies.

Vice-chair Özsoy reminded in his intervention that six months ago, the Assembly held another urgent affairs debate on Turkey. He recalled a few sentences from that resolution: “In the past months there were new crackdowns on political opposition and civil dissent… Investigations and prosecutions targeted members of parliament, … opposition political parties and lawyers. Continued undue pressure exerted on journalists… and civil society activists… Such crackdowns also have a regrettable chilling effect on women’s participation in political and social life.”

He continued: “Today the situation is similar but much worse, unfortunately, which is why we are having another urgent affairs debate. This resolution covers only some of the important issues that happened in Turkey over the last few months. Three of these issues are of particular concern: the first is Turkey’s refusal of executing judgments of the European Court of Human Rights regarding my party HDP’s former co-chair Mr Selahattin Demirtaş and Mr Osman Kavala. Second, is the politically motivated closure case to destroy the HDP – my party – before the next elections, and another possible round of lifting of parliamentary immunities and more arrests. The third is the withdrawal from the Istanbul Convention by a presidential decree. Turkey was the first country to sign this convention, which was an honour and source of pride. Now it is the first country to withdrew from it, which is a source of deep, deep shame for all of us to say the least. It is also absurd that these negative developments are happening after the government of Turkey had announced its Human Rights Action plan with much fanfare.”

Then the Vice-chair clarified a pertinent question: “What other problems do we have in Turkey?”

He said: “Some of them are mentioned in the resolution, some are not. Elected Kurdish mayors removed from office and jailed, the worsening health situation of hundreds of sick prisoners, torture and arbitrary detentions almost every day, ongoing hunger strikes to protest prison conditions, the policy of isolation imposed at the Imrali Island prison and Turkey’s refusal to implement recommendations of the CPT, the students and faculty members of Bogazici University who continue with their protests, detention of women protesting the withdrawal from the Istanbul Convention, continued harassment of journalists, lawyers and doctors…the list can be extended almost endlessly.”

He concluded by saying that “As the UEL Group, we thank the rapporteurs and fully support the resolution. We also think that, in encouraging Turkey to act as a genuine member State, it is high time for the Council and this Assembly to start considering the use of more effective means, mechanisms and procedures at their disposal other than simply having urgent debates, opinions, or statements of concern. The Turkish government, unfortunately, does not seem to have the will or willingness to fulfil the obligations of a member State, not even executing court decisions. In doing so, it is setting a very bad example for other member States to follow. That is why we are asking the leadership of the Parliamentary Assembly, Madam Secretary General and the Committee of Ministers, to have a concerted dialogue, address the aggravating situation in Turkey and uphold the values and principles that the Council proclaims to represent.”