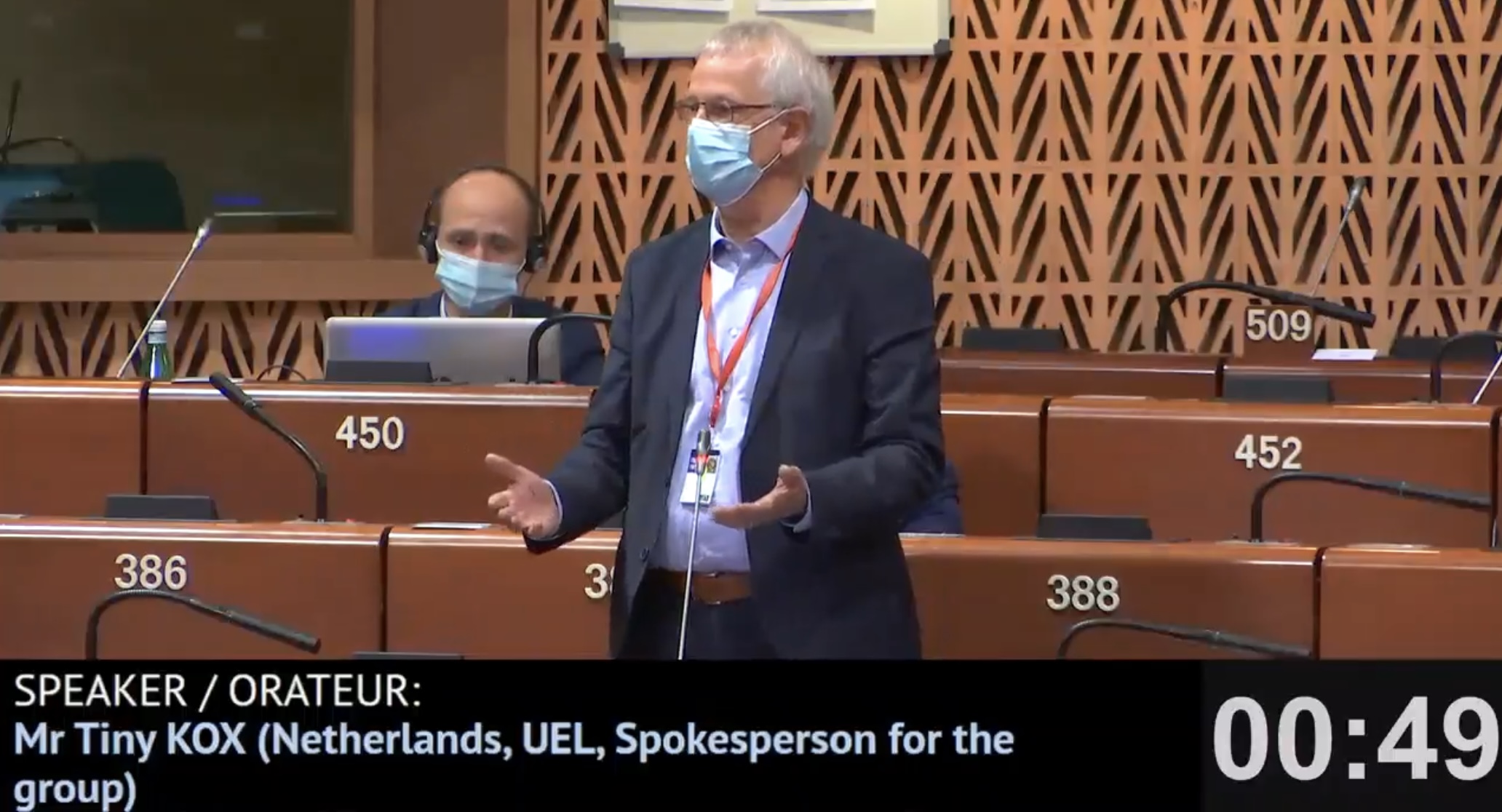 Today, the chairperson of the UEL group Mr Tiny Kox spoke on behalf of the Group in support of a resolution that has been presented by chairperson of the ALDE group, Mr Jacques MAIRE during the debate under urgent procedure: The arrest and detention of Alexei Navalny in January 2021.

Chair Kox said: “Yesterday President Putin made his State of the Union, which was watched by millions of Russians and the President addressed many important issues, like the pandemic, the international tensions and the social and economic situation in Russia. There’s one issue he did not mention in the State of the Union and that was the issue that was mentioned by thousands only a few hours later in the streets of Moscow and St Petersburg and Irkutsk and in Novossibirsk. That was the call, the question of the arrest and imprisonment of political activist Alexei Navalny.”

UEL chair said: “We have to be clear, the majority of the Russian citizens, according to the Levada studies, at the Levada Centre thinks that Mr Navalny is imprisoned rightly. And it is clear that the President of the Russian Federation also thinks so. But in this case, Mr President, it is not the majority that decides. As Russia is a member state of the Council of Europe and a signatory to the European Convention of Human Rights, it is the court at Strasbourg that finally decides whether or not the arrest and the imprisonment of Mr Navalny was correct. And it is the Committee of Ministers that takes share for the execution of this verdict. The verdict of the Court is clear, Mr Navalny only has to be released. He is imprisoned wrongly and I was happy to hear that Minister ROTH, the Chairperson of the Committee of Ministers just addressed this Assembly and stated that there are commitments if you are a signatory to the European Convention of Human Rights.”

“It is not for free and I was pleased to hear that Minister ROTH said we shall not rest – we the Committee of Ministers, in which also the Russian Federation is represented – we shall not rest before Mr Kavala, Mr Demirtaş, and Mr Navalny are released. He made it clear, Minister ROTH, that to release Alexei Navalny, as well as as Osman Kavala or Selahattin Demirtaş it is not a present given to them, it is an obligation. It is a binding obligation under the Convention and it is a binding obligation if you are a member state of the Council of Europe. And that is, I think, the essence of the report and the Resolution that our colleague Mr Jacques MAIRE presents to us.” said Mr. Kox.

He concluded: “Here we say the same thing as thousands of people yesterday said in the Russian Federation: free Alexei Navalny. Let him go. And not because he is a hero, not because he is a villain, not because he is something in between, it is because the highest court in Europe, the European Court of Human Rights in Strasbourg, said you have to release Mr Navalny, this is binding law and that is why the Group of the United Left supports the resolution presented by our colleague MAIRE.”