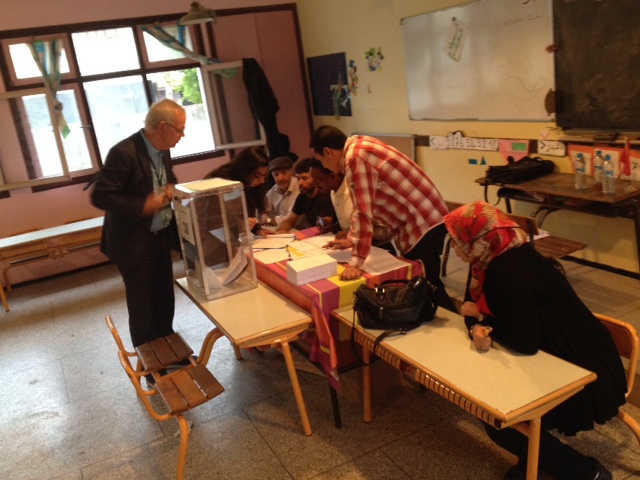 The citizens of Morocco have elected their new Parliament in a calm atmosphere on Friday. At least, the part of the population that went to cast their vote. The largest party, however, stayed home. Overall, only a quarter of all adult Moroccans, did vote. UEL Chair Tiny Kox, observer of the elections for the Council of Europe said that: “especially young people have stayed at home. They are certainly interested in what is happening but have very little confidence that the current political parties can or want to tackle the great problems of the country”.

M. Kox: “there are an estimated 27 million adult Moroccans. Only 15 million of them have been registered as a voter. And of those voters 57% eventually stayed home. The Islamist government party remains the largest party; the largest opposition party ends up as  second. Both, however, are not large enough to govern alone. Therefore, a wider coalition with smaller right-wing or left-wing parties should be formed. Many of those who stayed home will conclude that little will change. But also in Morocco counts: “staying at home does not improve the situation. If you do not choose, one will choose for you”.

One cannot speak about exciting elections. “Party programs were published only a few weeks before the Election Day, television debates were absent and opinion polls were banned in the last few weeks. There were election leaflets but they were lying mainly on the ground, so that the people ran over them. The Election Day went generally well, also because of the deployment of several thousand observers from political parties. In addition, there were international observers, including our delegation of parliamentarians from the Council of Europe. I myself was in the two largest cities, Casablanca and Rabat, but also in a few smaller places. The organization was reasonable, only when the counting is done, things can go wrong. The procedures are not clear enough and the polling-station members are not always well trained. Young people showed up very little in the polling stations. They apparently don’t believe that things like the massive youth unemployment, and problems in care and education, can be dealt with via elections”, M. Kox.

“Today, we have given a number of recommendations during on our press conference to the new Moroccan Parliament and the new Government. We want all complaints about fraud to be sorted out thoroughly. Furthermore, an independent Central Elections Commission is needed. Currently, the Minister of Home Affairs decides too much. With better procedures substantial improvements can be accomplished. But maybe the system where voters have to register should be eliminated. It has not helped to increase the participation during elections. What in any case should be rapidly addressed is the inaccessibility of the vast majority of polling stations for people with disabilities. I’ve seen how a heavily disabled man was carried up a set of stairs because he could not vote  on the ground floor in another polling station, of the same school. Rules are rules, said the President of the polling station. Well, then may those rules be quickly adjusted, I’d say”, continued M. Kox.

During the Arab Spring in 2011, the King of Morocco decided to enact major changes to the Constitution, which gave him until then absolute power. M. Kox: “the role of Government and Parliament were strengthened, although the monarch is still the most powerful man in the country which also has direct and indirect influence on the organization of elections. The winner in 2011 was the party of the Islamists, which also delivered the Prime Minister. Main opposition party became the party of “authenticity and modernity”, which in this election campaign claimed a somewhat liberal image, but in which many suspect the hand of the King. Nonetheless, many Moroccans find that political freedom has increased significantly but that problems as unemployment and corruption remain”.