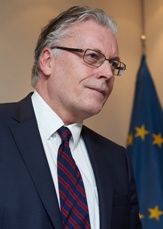 As I leave PACE after almost four years I do so with regret and some sadness in my heart but at the same time much respect for what the Council of Europe stands for and the way in which the Parliamentary Assembly endeavours to live up to its obligations. To this there are certainly exceptions but such exceptions should be seen to prove the general rule.

The Council of Europe has never in its history been as important as it is now in our troubled times, where fundamental values of human rights are being threatened and even questioned by high authorities and where the future of democracy cannot anymore be taken for granted.

The Council of Europe is thus not for Putin. It is for Pussy Riot, even if the Council may not agree with them. And when we throw the former out we are limiting access for the latter to the institutions we have created for defending their rights.

On the horizon there are some ominous signs. It is no exaggeration to say that society is in real danger of coming apart as grass root politics drift away from the institutional political world. And strange and undemocratic voices are now being heard; voices we have not heard for a long time. They are not always easily recognizable but then let us remember that fascism is often well dressed!

We need a bridge uniting people – a bridge over troubled waters – and the Council of Europe can provide that bridge. The bricks in that edifice are the good intentions of all those who want a world that is for democracy, openness and transparency, with respect for freedom of opinion and freedom of speech; in short a world based on the fundamental values of human rights.

Those who talk loudly about the importance of freedom of opinion and transparency do not always live up to those professed values. I want to give a little, but telling example from my own experience.

As we know the international trade agreements, GATS, TISA, CETA, TTIPS and TPP have been criticised for lack of transparency and limited democratic access. This is extremely serious since these agreements make binding commitment into the future for our societies.

I have been following these trade negotiations for a long time as a trade unionist, a politician and most basically as an interested citizen. I therefore welcomed to be appointed as the representative of the Parliamentary Assembly of the Council of Europe to the WTO Steering committee of the International Parliamentary Union (IPU) conference on these international trade agreements held in Geneva in June last year in cooperation with the European Parliament..

When speaking in the Steering Committee or at the IPU conference I made a point of referring to the nature of PACE being a body representing the whole political spectrum so that in my remarks I would stick to generalities and express only those views which were in compliance with an agreed PACE position. The stand of PACE, however, was very clear and had to do with democracy, openness and transparency. This I emphasised in my interventions.

In the minutes from the parliamentary conference, held under the heading What future for the WTO?, my contribution is referred to in the following way:
„We must not forget that what trade negotiators perceive as trade barriers, other people see as important standards for labour rights, the environment, public services, and trade union rights. Democratic concerns and the idea of good governance in trade negotiations are issues that are being raised increasingly in the Council of Europe.“

My tone was very much to this effect in the Steering Committee.

This of course should not be worth mentioning had it not been for a letter from the head of the EU delegation, „shared … with the IPU Co-Chair of the Conference“, formally complaining to the Council of Europe about my contribution in these deliberations, stating that „Mr. Jónasson repeatedly took the floor … where he did not hesitate to criticise different elements of EU trade policy“.
(See letter)

The letter is full of high flying language about the importance of „exchange of opinions, information and experience, as well as for the promotion of common parliamentary action in the area of international trade. …“ In the letter we are reminded that fairness is important and so is transparency and of critical importance is to stimulate a “dialogue between governments, parliaments and civil society…“ The „smooth functioning“ of all this should be ensured through the Steering Committee and this is where I am seen to have stepped out of line and indeed in such a serious manner that it called for a formal letter of complaint, where I am accused of daring to express critical views on trade negotiations that as everybody knows have attracted a storm of public criticism for being undemocratic and lacking in transparency.

The President of PACE made a reply, defending my position stating that „the elements of concern raised by Mr Jónasson are worth being looked into by the Steering Committee on the WTO in its future work…“
(See letter)

Shortly afterwards I was appointed to represent PACE again, this time at the September meeting of the Steering Committee of the Parliamentary Conference of the WTO.
(See letter)

Thereby PACE showed by deed that it was determined to defend my freedom of speech against an attempt to silence my voice and indeed the voice of PACE, expressing concern for democracy.

Now when I leave PACE I pay tribute to the Council of Europe and the Parliamentary Assembly and thank all those I have cooperated with, not the least the staff of my party group, the UEL and the Secretariat, who make us all look a little better than we actually are in reality.